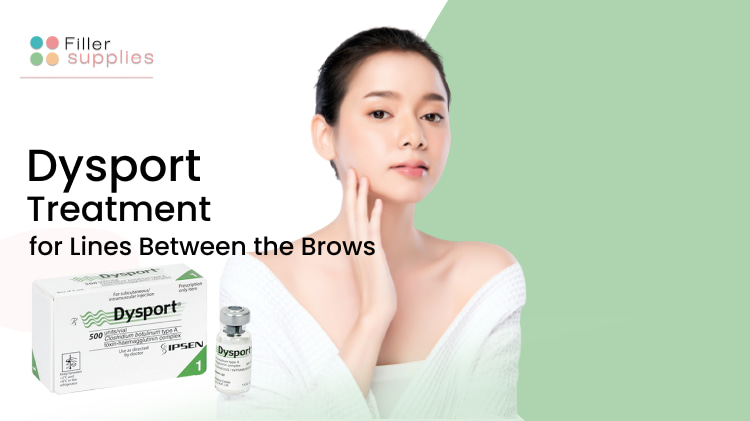 We bet you have heard about Botox, a cosmetic injectable that is used to treat different types of fine lines, folds, and wrinkles. However, did you know that there exists a number of other brands with very similar active substances, working principles, and indications?

Despite the fact that Xeomin, Vistabex, Bocouture, Azzalure, and Dysport are not as widely spread as Botox, they are also botulinum toxin products that are used to reduce the appearance of skin depressions.

So, how about taking a closer look at Dysport prescription injection? Let’s go through its basic peculiarities and then pay special attention to its usage to treat lines between the brows.

P.S. To ensure the proper quality of the botulinum toxin drug, make sure to order it from a reliable supplier only.

Dysport is a cosmetic injectable that is used for the treatment of fine lines, folds, and wrinkles. It has already gained substantial popularity among health care practitioners and their patients in the sphere of aesthetic medicine.

The main active component of the Dysport treatment is botulinum toxin type A. While being a substance that is produced by the bacterium Clostridium botulinum, it might be both dangerous and useful at the same time, namely:

P.S. Despite the fact that botulinum toxin type A is a potentially dangerous substance, it is pretty safe when it comes to its administration beneath the patient’s skin in a form of an injection.

The working principle of the substance is pretty straightforward. Here is how it works:

P.S. Due to the fact that Dysport has botulinum toxin type A (that causes muscle relaxation) as its main active component, it is especially efficient when it comes to the treatment of dynamic wrinkles that appear as a result of active muscle movements or facial expressions. So, if a patient needs to take care of static skin imperfections, the usage of dermal fillers might be a more reasonable choice.

As a result of the Dysport injection, patients are expected to obtain a profoundly rejuvenated and enhanced appearance. Their skin will look younger, mainly because of the aging signs reduction.

On average, the effect of the Dysport injection will last up to 5 months. However, everything depends on:

P.S. If compared to Botox (which is probably the most widely-spread type of botulinum toxin type A treatment), Dysport will have a more durable result (namely, it might last for about five months instead of four). At the same time, Botox tends to have a slightly higher price if compared to the Dysport cost.

Side Effects of Dysport

Like any other medical or cosmetic treatment, the administration of Dysport has its own most common side effects. In some cases, a patient might experience these symptoms after the injection of the preparation:

While some of the above-mentioned symptoms might carry no risks and disappear on their own within a limited time period after a Dysport injection, others might lead to a number of health complications, such as breathing difficulties. Therefore, a patient should contact a health care practitioner in case of having any of the above-mentioned side effects after the procedure.

P.S. In rare cases, Dysport might also spread from the injection site to other parts of a patient’s body. This health condition is known as the “distant spread of toxin effect” and might lead to the loss of breathing and swallowing control of a patient.

Dysport injections are not suitable for people under one of the following circumstances:

Apart from the above-mentioned health conditions, there might exist other contraindications to the Dysport treatment (for instance, pregnancy or breastfeeding). Therefore, it is a prescription injection that might be administered only after a thorough medical investigation of a patient.

The Dysport injection might be used for both medical and aesthetic purposes. However, let’s put the medical application of the preparation aside for now and talk about its aesthetic usage. Below, you will find a short overview of the main cosmetic procedures that involve Dysport.

P.S. Despite the fact that Dysport has a wide range of cosmetic implications, it is mainly approved as a treatment of glabellar lines between the eyebrows.

Dysport injections do a great job when it comes to the diminishment of wrinkles in the perioral area. Namely, they might take care of:

P.S. Even though Dysport might take care of both mild and severe wrinkles in the perioral area, it is not the “number one” choice when it comes to lip augmentation. It might still intensify your natural lip shape, but it won’t plump them substantially.

One of the most effective ways to get rid of crow’s feet is to inject Dysport. The preparation will be effective even when it comes to the reduction of severe lines around the eye area.

The main reason for it is that smile lines (it is another name for crow’s feet) belong to dynamic wrinkles that are mainly caused by muscle contractions. Therefore, the relaxing qualities of Dysport will have an amazing effect on them.

Apart from the Dysport effectiveness in taking care of perioral wrinkles and crow’s feet, it is also a safe, durable, and efficient treatment of glabellar lines (or, as they are sometimes called, frown lines). Let’s figure out why is it so.

Firstly, it is essential to mention that glabellar lines appear as a result of muscle contraction between the eyebrows (in the so-called glabellar area). While such facial expressions as frowning and blinking, in their turn, only contribute to the appearance of glabellar lines. Therefore, the relaxation of muscles in this area is probably the most effective method of taking care of these skin imperfections.

Secondly, moderate to severe frown lines between the eyebrows belong to aesthetic issues that are not easily treated. In some cases, it might be even easier to take care of intense nasolabial folds, deep facial scars, or drastic pigmentation than to diminish glabellar lines. The main reason for it is that they belong to dynamic wrinkles and, therefore, accelerate whenever a person does active facial expressions. Thus, only such a powerful substance as botulinum toxin type A (the main component of Dysport) will manage to take care of dynamic glabellar lines.

So, the Dysport injection serves as one of the most efficient strategies for the temporary improvement of lines between eyebrows (glabellar or frown lines, as they are also called).

Other Cosmetic Applications of Dysport

Apart from the above-mentioned cosmetic procedures that involve Dysport, it might also have other cosmetic applications. Namely, a health care practitioner might use it to treat other aesthetic issues that appeared as a result of muscle contraction.

P.S. Please note that Dysport does not relax muscles permanently. Thus, it is a useful injection for temporary improvement of a wide range of aesthetic issues.

All in all, Dysport is an effective medication that serves as an efficient treatment of moderate to severe frown lines between the eyebrows. While having botulinum toxin type A as its main active substance, Dysport is an efficient muscle-relaxer with numerous cosmetic implications. However, its primary function is to treat glabellar wrinkles (or, as they are also called, frown lines).

So, feel free to try out Dysport if you are looking for a way to treat the lines between the brows and, therefore, prolong your youthful appearance!

Botox is undoubtedly among the first solutions that come to mind when it comes to effective skin rejuvenation and wrinkles reduction. Along with dermal fillers, this product is among the most popular options for numerous aesthetic purposes, and today we would like to discuss this phenomenon. Because how to understand […]

What is the Most Danger Zones for Botox?