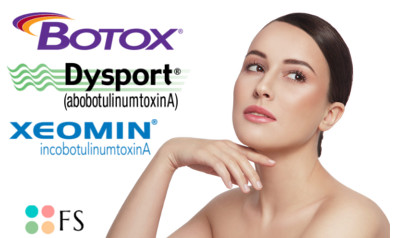 Nowadays, most customers who have undergone the anti-aging treatments are familiar with Botox. However, the emergence of Dysport and Xeomin induced the clients to hesitate between the additional choices and pricing options. “How to differentiate the Xeomin, Botox and Dysport injectables?” and “Which wrinkle reducer is the best option for me?” are the most common concerns about the treatments. So, let’s take a look at Xeomin vs Botox vs Dysport comparison, find out the main peculiarities of the injections and how to benefit from the procedures.

Xeomin vs Botox vs Dysport: Explanation of the Differences

All injectable wrinkle treatments originate from the same source bacterium, clostridium botulinum. The reducers are synthesized as botulinum toxin type A, the paralyzing agent or neurotoxin that is administered. Xeomin, Botox, and Dysport are all FDA approved, as well as used to smooth the wrinkle and ease out their appearance.

The most common sites treated are crow’s feet, forehead, frown lines around the eye area and brow lifts. The smoker’s lines around the lips, cleavage wrinkling, and even underarm sweating are becoming more popular. The results of all treatments last up to 4-6 months on average. Even though the results are almost the same, consider the primary aspects of each injectable:

Who can Use Xeomin vs Botox vs Dysport?

The wrinkle reducers are safe for all types of skin. However, if you are pregnant, breastfeeding or suffer from any neurological diseases, it is recommended to avoid the procedures undergoing.

Can You Experience Any Pain?

The treatments are done with a very fine needle. Every particular muscle is injected for a several seconds with a feeling of minor discomfort. In case you are sensitive to needles, the anesthetic cream or ice can be applied before the process.

Are There Any Side Effects?

After the treatment is behind, you can notice and experience some redness or swelling in the injected areas. Since the redness will be momentary, you can come back to your daily activities right after the procedure. In some cases, you may get some bruising, but nothing that a little concealer can’t hide.

Pulling it All Together

To conclude, Xeomin, Botox and Dysport are efficient treatments with a slightly different formulation of the same substance. So, the main differences to consider are:

By and large, if you want to learn more information on the wrinkle injectables or buy Botox, Dysport online, reach out Filler Supplies experts for useful insights.

Botox is undoubtedly among the first solutions that come to mind when it comes to effective skin rejuvenation and wrinkles reduction. Along with dermal fillers, this product is among the most popular options for numerous aesthetic purposes, and today we would like to discuss this phenomenon. Because how to understand […]

What is the Most Danger Zones for Botox?