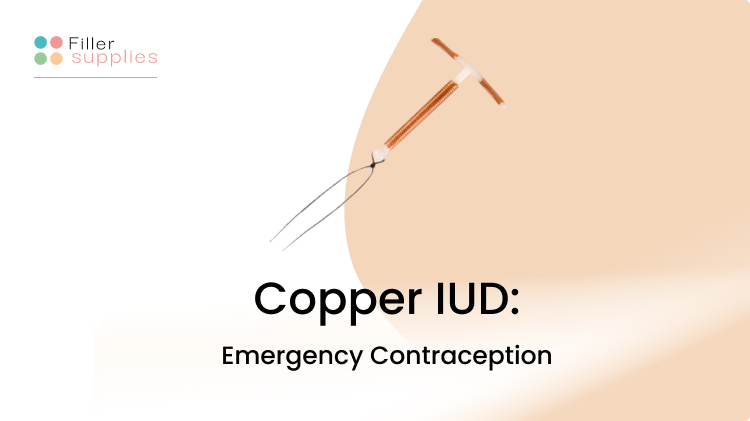 Did you know that the usage of  intrauterine devices for contraception is becoming more and more popular these days? Namely, it has tripled during the last three years. While copper IUD, in its turn, is one of the most widely-spread types on intrauterine devices.

But can copper IUD be also used as a method of emergency contraception? Let’s figure it out together!

What Is Copper IUD?

Before defining what is copper IUD, it might be useful to define the notion of an IUD in general.

In simple terms, an IUD is a device that is inserted into a patient’s uterus to prevent unintended pregnancy. Its abbreviation is deciphered as an intrauterine device.

There is a number of brands that manufacture IUDs. However, basically speaking there are only two main IUD types, namely:

The basic difference between them is that hormonal IUD is based on a release of hormones to prevent pregnancy, while copper IUD works as a non-hormonal method of birth control.

Now, let us delve into the discussion of copper IUD, which might be defined as a non-hormonal intrauterine device that is used as an efficient birth control method.

When being more precise, copper IUD has the following peculiarities:

Thus, copper IUD is one of the most effective and durable contraceptive options that exist on the reproductive health care market these days.

How Does Copper IUD Work?

The working principle of copper IUD is pretty straightforward (namely, we have divided it into two principal steps). Here is  how the process goes:

Therefore, the copper IUD is a highly effective birth control method that is based on creating an uninhabitable environment for sperm by means of releasing copper ions.

As well, please note that the copper IUD does not stop your ovulation. Therefore, you will most probably have a normal menstrual cycle with vaginal bleeding.

As a side note: On the one hand, some women even claim to experience heavier or more painful menstruation while being on the copper IUD contraception. However, it usually gets back to normal within a time period of several months. On the other hand, there are women who do not have menstruation while using copper IUD as their method of contraception.

What Are Copper IUD Intrauterine Devices Used For?

There are two main applications of copper IUDs:

Let us figure out how is it applied in both cases.

The primary reason for the copper IUD insertion is to protect oneself from an unexpected pregnancy. As we have already discussed above, it is one of the most efficient, long-lasting, and convenient methods of contraception.

However, the copper IUD is also used for another purpose, which is emergency birth control. Namely, it will most likely prevent you from undesired pregnancy if you install it within 5 days after unprotected sex. The efficiency of the copper IUD, in this case, will be more than 99 percent. Therefore, it is considered to be the most effective emergency contraceptive these days.

Here is how emergency contraception works when it comes to the copper IUD:

Therefore, the usage of the copper intrauterine device is an extremely efficient emergency IUD contraception.

Pros and Cons of the Copper IUD Emergency Contraception

Like any other birth control method, emergency contraception with the help of copper IUD has its advantages and disadvantages. Below, you will find the list of the main ones.

Here are the pros of using the copper intrauterine device as an emergency contraception method:

However, the usage of the copper intrauterine device has several cons at the same time:

When it comes to the price of the copper IUD, it might be seen as an advantage and a disadvantage at one time: on the one hand, the copper IUD costs from $0 to $1.500 (depending on such factors as your health care insurance), which is a substantial one-time investment. On the other hand, however, it is not just emergency contraception that happens only once but also long-term protection from undesired pregnancy for up to 10 years.

All in all, the copper IUD is an effective method of emergency contraception that has its own benefits and drawbacks. Therefore, it is absolutely your decision whether to use it or not. So, make your choice and plan your pregnancy efficiently!