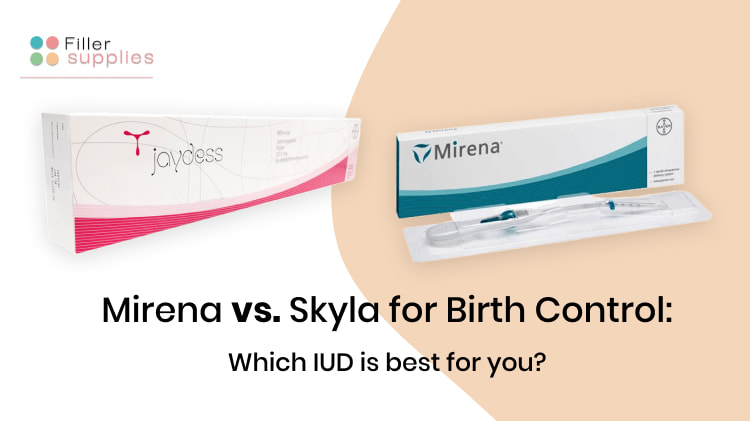 Thousands of women worldwide prefer intrauterine devices (IUDs) over other birth control options. Why? Because it is the most effective way to prevent pregnancy, it is long-lasting and comfortable. The Food and Drugs Administration in the USA has approved several brands of IUDs, where Skyla and Mirena are among the leaders. If you consider an IUD as a suitable method for contraception in your case, then perhaps, you would be interested to know at is similar and different between the 2 brands, how they work to make the correct choice. So, let’s get started.

Mirena is an intrauterine device from Bayer manufacturer. The device is T-shaped, so it is easily inserted and perfectly fits into the uterus. Its size is, and it can easily be placed in your palm. The kernel of Mirena contains a reservoir with the active substance – levonorgestrel hormone (52 mg), which is gradually released into the patient’s uterus to prevent pregnancy. Levonorgestrel releasing intrauterine system is aimed at blocking the ovulation process (release of the egg from the ovary) and delaying the development of the uterine mucosa, thereby making it difficult to implant the ovum.

Mirena is among the most effective birth control methods, which possesses a long-term pregnancy prevention effect. Among a thousand patients using Mirena, there are, on average, just 2 cases of unwanted pregnancy during the first year of using the IUD. On the contrary, once the woman decided she wanted to become pregnant, her fertility is restored in quite short time frames once she removes the IUD from her uterine. The cases when fertility is restored in a longer period (around 3-6 months) are quite rare.

It is crucial to mention that Mirena, as well as any other IUD, is not able to protect you from sexually transmitted diseases and AIDS. That is why it is more suitable for women with a single sexual partner who chooses this intrauterine system for planned parenthood. By the way, its effect lasts around 5 to 7 years.

Skyla (also known as Jaydess) is another intrauterine contraceptive from Finland manufacturer Bayer. It is another intrauterine device with progestin hormone, levonorgestrel. If the active substance is the same, you may ask a logical question – what is the difference between Mirena and Skyla except for the brand names? The basic discrepancy lies in the dosage, concentration of levonorgestrel in the devices. Skyla contains just 13,5 mg of the hormone compared to 52 mg of levonorgestrel in Mirena. Thus, the daily release of the hormone into the blood of Skyla (Jaydess) is considerably lower – 14 mcg per day, and around 20 mcg per day for Mirena.

While Skyla is also a T-shaped IUD device, its size is smaller: 28 mm x 30 mm. Due to the lower dosage of the active substance, its exploitation period is just around 3 years, while Mirena is effective from 5 to 7 years.

If we talk about the effectiveness of Skyla, these hormonal IUDs are on par with Mirena and lead on the market of contraceptives. Likewise, Skyla IUD does not protect from sexually transmitted infections and is not suitable as emergency contraception.

When we have discussed what Mirena and Skyla IUDs are, you have probably noticed that they have lots in common. Basically, they differ by the size of the IUD and concentration of the active substance. However, the difference in the dosage causes a discrepancy in the strength of the pregnancy preventative effect and its duration. Nevertheless, we can not say that Mirena is a better IUD choice because you can change it once in 7 years. In the same way, we cannot say that Skyla IUD is better than Mirena because it is smaller, thus causes less discomfort during the insertion, exploitation, and removal processes.

So, how to determine which kind and brand of the IUD is a better choice particularly for you? The thing is that there is no single answer to the question. They are both effective, safe, long-lasting, and FDA-approved. If you hesitate between Mirena and Skyla IUD systems, you should consult with the health care provider to know which one suits you the best as your hormonal background, the size of your uterus, medical history, age, and the fact whether you have already given birth or not will tell the doctor a lot when choosing among the IUDs for you.

Does Skyla have fewer side effects than Mirena?

The truth is that due to the similar construction and the same active substance in Skyla and Mirena hormonal IUDs, they have exactly the same possible side effects. This can include:

Any side effect is an individual reaction of the organism, and it does not mean that you should have all of them. These reactions are temporary and should disappear after 2-3 months after the insertion of the IUD.

First weeks after the insertion of the IUD, please closely monitor your well-being and inform your doctor about any discomfort that bothers you. Also, you should undergo a medical examination to make sure everything is okay, the IUD did not move from its location, there is no internal infection or bleeding, etc.

Which Type of IUD Method of Birth Control is best?

So, we have analyzed all the similarities and differences between the 2 types of IUDs – Mirena and Skyla. We have found out that these IUDs are products from one Bayer manufacturer, based on the same hormones, have the same side effects. They differ by the concentration of levonorgestrel and the duration of the effect, which is super high for both types of IUDs. They are both super effective top-quality hormonal long-lasting contraceptives. The best type of IUDs, in this case, is the one that perfectly suits your requirements for a contraception method, will be comfortable, and safe for you. we recommend you undergo a medical examination with an experienced and qualified OB-GYN doctor, who will help you make the right decision.